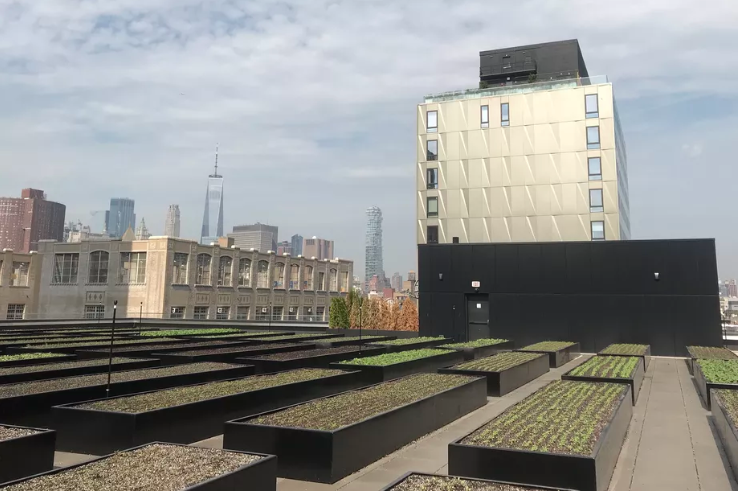 The farm will hawk fresh produce including carrots, radishes, and arugula.

A new farm, now among the largest in the borough, launched Wednesday at the Essex Crossing megaproject in the Lower East Side.

Located on the sixth floor of The Essex at 125 Essex Street, the quarter-acre farm will be run by Project EATS—a nonprofit that operates farms across the city—and will grow organic carrots, radishes, beets, turnips, and baby greens, such as kale, mustards, and arugula.

“We’re looking forward to welcoming the LES community to the farm and providing fresh produce for the neighborhood in the Market Line,” said Debbie Kenyon, vice chair and senior partner at L+M Development Partners, in a statement.

Produce from the urban grange will be sold at the Farmacy, a stand at the megadevelopment’s upcoming Market Line, which will run below Essex Street Market. Until then, the Farmacy will temporarily sell the fresh veggies at a recently opened public park that was similarly developed by Essex Crossing’s development team, Delancey Street Associates (a collaboration between L+M Development Partners, BFC Partners, Taconic, Prusik Group, and the Goldman Sachs Urban Investment Group).

That stand will be open for business on Wednesdays and Saturdays from 11 a.m. to 4 p.m until the Market Line stall is up and running.

The farm will also feature programming for public schools on the importance of nutritious food and will offer free Saturday breakfast for seniors living in the neighborhood. Healthy lifestyle workshops, neighborhood forums, and community dinners are also in the works.

Opportunities for workforce development are another component of the project, as Project Eats will train and employ students from Seward Park High School to work at the farm and the Farmacy.

Just over a month ago, Essex Crossing debuted its 15,000-square-foot park, and earlier that month, the new version of Essex Street Market opened its doors to much fanfare.