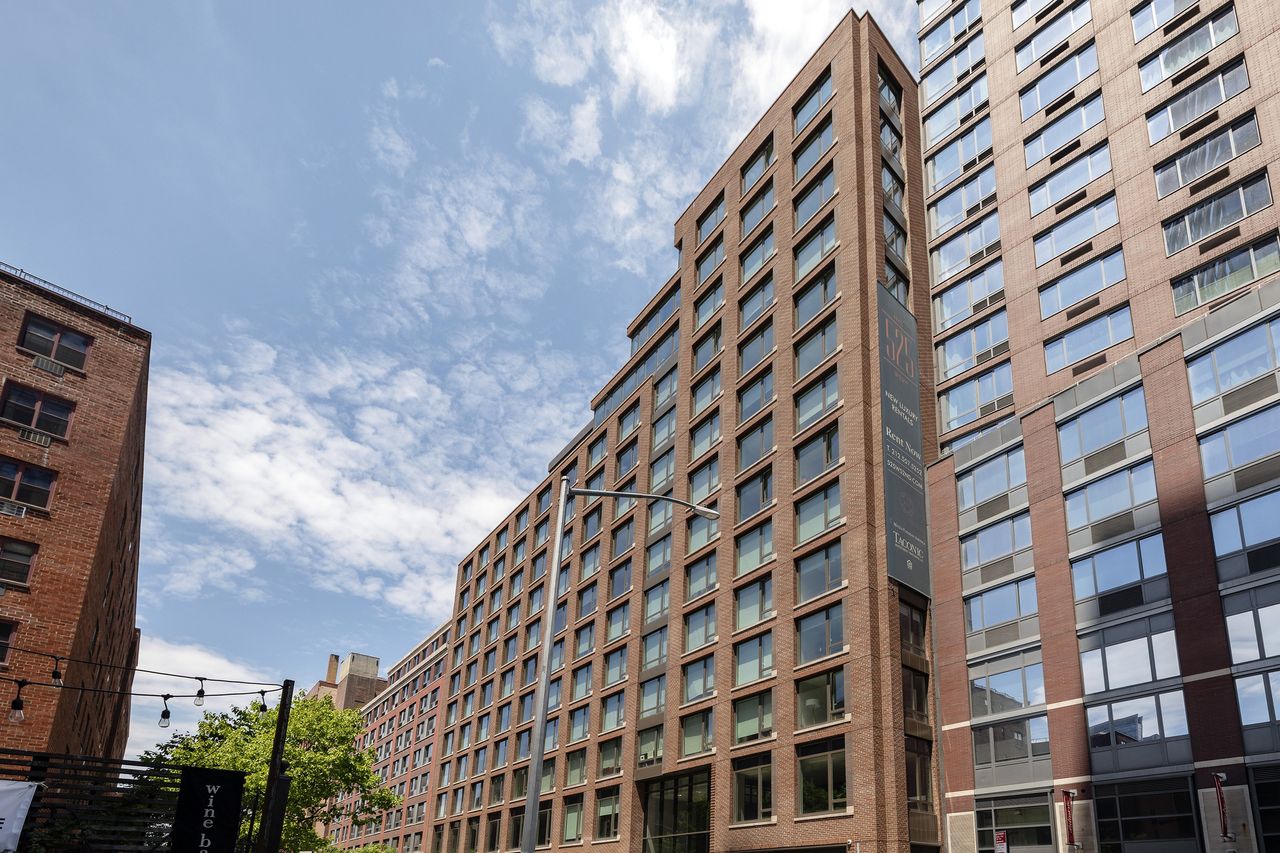 With amenity spaces off limits, lifestyle directors and amenity-service companies are planning virtual classes, workshops and online meet-and-greets to fill the void amid coronavirus

A Date Night dinner demo was in full swing one recent Friday at 525 West 52nd Street, a luxury rental building in Manhattan.

Peter Sheehan, resident experience manager for the 392-unit complex, where rents range from $3,500 to $9,000, greeted residents as they arrived. Then he introduced the head chef from a boutique cooking school who would be teaching them how to prepare handmade ravioli with brown butter and sage.

“We’re just trying to get people engaged and connected, and hopefully doing some good cooking,” said Mr. Sheehan, a 36-year-old former hotelier. “I’ve got my dough wrapped up and my wine is flowing.”

But unlike the many events Mr. Sheehan hosted in the building in the pre-Covid-19 past—whiskey tastings, poker nights, concerts by subway musicians—this Date Night was virtual. The chef, 35 residents and Mr. Sheehan were each in their own kitchens connecting via Zoom, the videoconferencing service.

With the novel coronavirus and strict social-distancing mandates confining New York City residents to their apartments, Mr. Sheehan’s job—keeping his residents connected through a steady diet of events, activities and treats—has gotten a lot more challenging. When they are not planning virtual events, social directors like Mr. Sheehan have become a lifeline for stir-crazy renters, offering tips on which local stores have fresh fruit and short lines, and hooking up online activities for children.

“It helps them navigate trickier times, understanding that there are people here supporting them,” Mr. Sheehan said of the renters.

That Friday morning, he had set out white bags of neatly packaged ingredients in the lobby, tagged with the apartment numbers of residents who nabbed, free of charge, the 35 spots in the limited workshop. Before the lesson began, he checked in with Ken Connors, head chef of City Cooking West End, to make sure the chef’s webcams had good angles on his butcher block and stove.

For a developer with a high-price building to lease out, it was no longer enough to have a rooftop terrace, you had to have a stargazing party on that terrace with a guest astronomer and catered s’mores.

Although many developers work with amenity-service companies, others have installed in-house lifestyle directors like Mr. Sheehan—a hip reboot of Julie the cruise director from “The Love Boat,” with a bro beard.

“Peter has been the friendly face of the building, checking in just to say, ‘Hi’ or ‘Here’s something for the kids,’ or a [virtual] exercise class, or ‘If you’re feeling alone, here is counseling they’re offering [through a Zoom workshop],’ ” said Dean Loxton, 45, a filmmaker. He lives at 525 West 52nd Street with his husband and 18-month-old daughter, Maya, in a two-bedroom apartment they rent for $8,200 a month.

Although he has his own office in the building, Mr. Sheehan is employed by LIVunLtd, an “amenity space-management and activation” company that provides a range of services to about 200 residential buildings in New York City and New Jersey—64 of which have dedicated on-site coordinators.

Since the pandemic hit, LIVunLtd has developed a roster of a la carte virtual events: live-streamed yoga and Pilates classes, workshops on perfume-blending and truffle-making, and online meet-and-greets with actors from shuttered Broadway shows such as “Wicked” and “Hamilton.”

Before the pandemic, 525 West 52nd Street’s developer, Taconic Partners, was spending $50,000 to $100,000 a year on amenities programming, according to Vice President Andrew Schwartz.

Residents of the building, which opened in 2017, get access to its club programs for a monthly fee of $85, since suspended. The building’s library, fitness center, golf simulator lounge and other amenity spaces have all closed, but Mr. Sheehan is still coming in several days a week.

In mid-March, Waterline Square, a three-tower complex on Manhattan’s Upper West Side with 916 rental apartments priced from $5,230 to $35,000, was days away from opening its Waterline Club: a 100,000-square-foot amenity space with an indoor tennis court, 30-foot rock-climbing wall, bowling alley and recording studio.

“We had a robust calendar of activities, with more than 25 events planned,” said Kelly Sullivan, lifestyle director for Waterline Square, which opened last September.

When the pandemic shut that down, Ms. Sullivan shifted gears. “We want to give people that sense of community they’re not getting,” she said.

She asked Waterline Club fitness instructors to begin streaming their classes live on the complex’s Instagram feed, clad in club-branded baseball caps and T-shirts. (She has since provided microphones and tripods to improve sound quality.)

Brian Feinstein, 47, a composer who was in the midst of adapting the “The Bad News Bears” for Broadway when the pandemic hit, lives in a one-bedroom apartment at Waterline Square. He participated in the comedy night and a Zoom workshop on stress-reduction led by a psychology professor.

“He spoke about meditation and how those of us who are carb-loading can be more mindful with food,” said Mr. Feinstein, who got his one-bedroom, ordinarily listed for about $8,250, at a reduced rate through the city’s affordable-housing lottery. “To have these events and be able to see them on the calendar is great. It gives a sense of structure.”

Other lifestyle directors are going beyond virtual events to provide some hands-on support for their residents.

“If we know they have a birthday coming up, we’ve been decorating residents’ doors with streamers and balloons,” said Thea Wittich, co-founder with her husband, Michael Wittich, 40, of Axiom Amenities. They oversee the amenities program at 50 West, a 186-unit tower in Manhattan’s Financial District.

“We’re doing one for a resident who is graduating from the University of Pennsylvania, in her school colors,” she said of the decorated doors.

Before the pandemic, Ms. Wittich, a 33-year-old former personal trainer, hosted three to five free events a month for 50 West residents, who pay between $6,200 and $65,000 a month for rental units (the building is roughly split between rentals and condos).

The building has a full-floor fitness center and an entertainment floor with its own theater, both of which are now closed. But its team of three full-time amenity staffers have remained on site throughout the pandemic.

1½ tablespoons lime juice
½ tablespoon fresh ginger juice (add more for a nice kick)
2 oz. vodka
½ oz. club soda
Combine all ingredients in a shaker, except for the club soda. Give a quick shake with a few ice cubes.

Strain the cocktail into an iced glass and add club soda.

Garnish with a lime wedge and candied ginger.

For more fizz, add another half-ounce of club soda, and ½ oz. less vodka.

“There is this vision that you lay off your amenity people in a pandemic, but they have responded to this in a very strong way,” said Seth Coston, director of residential operations for Time Equities, the developer of 50 West.

Along with setting up a Zoom schedule of boot camp and yoga classes, the couple put together home-fitness kits with yoga mats, rollers and bands, and then delivered them, free of charge, to any resident who wanted one.

They also started a weekly program for children, dropping off craft kits and snack packs outside residents’ doors. “We do educational packets with STEM activities. They can build things with Popsicle sticks. We try to make it time-consuming,” Ms. Wittich said, adding that a recent papier-mâché craft didn’t get many takers: “No one was up for that mess in their house.”

She also puts out a daily newsletter with recipes and brain-teasers.

“Whoever answered the most questions correctly won a salmon meal kit and we won. My husband and I are kind of geeky, so we’re looking forward to the next one,” said Stephanie Sun, 36, an e-commerce manager for Walmart who lives with her husband and 3-year-old daughter in a two-bedroom apartment they bought in 2017, for a price she didn’t disclose. Comparable rental apartments at 50 West cost about $13,000 a month.

Thea and Michael Wittich themselves live in a building with no amenities three blocks from a city hospital.

“We are very fortunate. A lot of people are very sick,” Ms. Wittich said. “It has been wonderful for us to take [our] creativity and fine-tune it so people don’t feel alone.”

TIPS FOR THE PROGRAM DIRECTOR
What does it take to be the lifestyle director for a high-price luxury building in New York City?

“You need a unicorn for this job,” said Michael Fazio, co-founder and chief creative officer of LIVunLtd. “You’re a host, you’re a curator, you’re a customer service manager, you’re a counselor.”

Mr. Fazio, once a concierge at Manhattan’s Intercontinental Barclay Hotel, said that though a hospitality background is a plus, he rarely recruits people from the hotel industry. Instead, his team scouts out potential lifestyle directors from the Actors’ Equity Association, design schools such as Parsons and Fashion Institute of Technology, and even while shopping or dining out. “When I go to a nice store or a restaurant and there’s someone who just has the DNA, I tell them about what we do,” Mr. Fazio said.

A two-week basic training follows, in which the raw recruit learns everything from how to deal with a broken treadmill and a no-show caterer to how to greet residents at the monthly mixer. “We don’t ask, ‘Are you unmarried?’ ” said Mr. Fazio.. He shared a few of his golden rules for lifestyle directors:

• Be friendly, but not a best friend. “We have to be very careful,” he said. “People have invited my staff to dinner parties and to their weekend homes in the Hamptons. We can’t do that.” When fielding a tricky invitation, he advises lifestyle directors to say, “I would love to, but it’s company policy that I can only be here working.”

• Beware the man bun. “Even though it’s very fashionable for men to have facial hair, there are certain resident populations where it might not depict the mood,” Mr. Fazio said. “But if it’s a trendy Brooklyn building with a lot of creatives, there’s no problem if you have an armful of tattoos and a big beard and a ponytail.”

• Be a team player. “Never commiserate with residents about problems in the building. It could be the absolute worst, nearly negligent property manager, but you never say, ‘Yeah, I know, he’s such a moron.’ Instead, it’s ‘I’m so sorry you feel that way, let me report that.’ ”

• No drinking on the job. “We’re not the guests, we’re the party-starter. Even if we’re raising a glass with the residents, we need to stay focused and remember all the golden rules, which could slip our mind.”