The Office of the Future is Outdoors 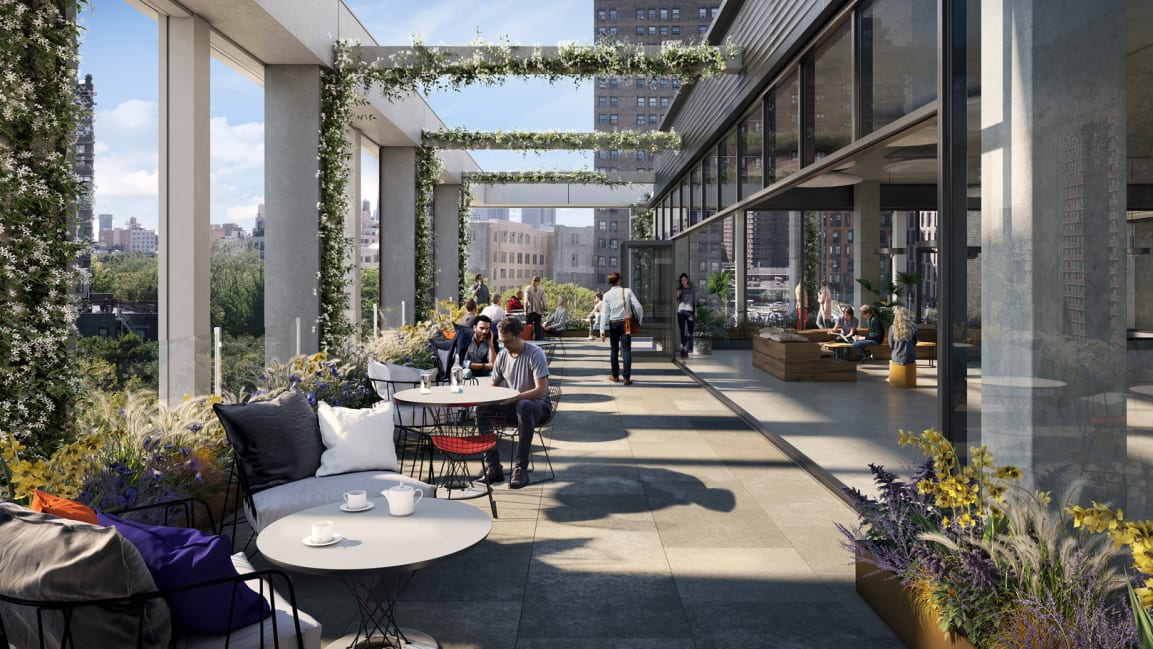 Landlords and designers are adding more outdoor space to office buildings, so employees can actually work outside.

Office life is about to move outdoors.

In buildings across the country, new and renovated offices are being designed to include more options for workers to get away from their desks and go outside. According to designers, developers, and landlords, it’s an emerging trend that could shake up the way workplaces look and feel for years to come.

“Access to daylight, good fresh air—those kinds of things are really tangible to the tenants,” says Marc Fairbrother, vice president of the architecture firm CallisonRTKL. “We are headed in those directions where it’s more about the user experience than efficiency and the cost of the product.”

CallisonRTKL has several projects in the works that are putting a premium on outdoor space. Common building amenities such as fitness centers and ground-floor cafés are being augmented with new spaces for outdoor breaks and even outdoor working. One project currently in the works, a new office building in Arlington, Virginia, for the global construction company Skanska, includes a variety of outdoor spaces throughout the building. At street level, there’s a quarter-acre parklike space with seating and shaded areas that can be used by the public or by office workers. On the roof, there’s a large patio space, with various seating options that can function as lunchtime getaways, informal working areas, or spots for open-air presentations. The roof also includes an enclosed central conference room that can host both formal board meetings and after-hours cocktail receptions.

They even added outdoor spaces on a part of the office that has traditionally been unpopular. “The second floor, which is always the hardest to lease in office space, is where we put the terraces,” says Fairbrother.

Another of the firm’s projects, an office building in Tulsa that’s slated to open in 2023, was designed to include terraces on every floor. CallisonRTKL principal Dallas Branch says it’s a new approach, and one that the designers had to tinker with before it felt right. “We’re not used to seeing that in offices. When we first laid it out, it seemed like a residential building because it looked like we had balconies everywhere,” says Branch. “We had to tweak the design a bit to keep that office building look.” As a result, every floor will have about 1,500 square feet of terrace space for the tenants.

The move toward the outdoors has been underway for years, but unlike in the past, this new generation of outdoor spaces is less about escape than about adding new types of spaces for people to work and interact in.

“In the early days, these were meant more for social gatherings, but you’re starting to see even the idea of outdoor conference rooms,” says Matt Weir, of the New York-based developer and landlord Taconic Partners. “You’re laying out furniture, you’re creating privacy with greenery, you’re creating alcoves where you can put a table and folks could have a board meeting or a presentation.”

Taconic is now finishing up several projects in New York that embrace this. One is the renovation of 440 9th Avenue, a building from 1927 with distinctive wedding cake-style setbacks on its upper floors. To create more of a connection to these preexisting outdoor spaces, Taconic has added NanaWalls, sliding and folding walls that can be opened.

Adding these kinds of spaces can be expensive, Weir says. For new rooftop spaces, elevator shafts have to be extended, as do emergency stairwells to meet fire and safety codes. New shading and planters may also require structural renovations to support the additional weight. But in many instances, the costs of adding these spaces can be offset with higher rents. “The buildings that provide these spaces certainly carry a premium versus buildings that don’t,” says Weir. “And I think it’s becoming one of those standard, check-the-box things that tenants are looking for. If you’re not able to provide this, you’re at a competitive disadvantage.”

In expensive markets such as New York, landlords understand that these kinds of spaces are appealing to workers and also to the companies that are trying to attract and retain them. With office vacancy rates higher than normal during the pandemic, landlords and building owners know they need to try harder to lure in tenants.

Though COVID-19 has changed the way a lot of people think about office environments, Weir says this trend isn’t necessarily a pandemic reaction; it sometimes reflects a new way of working. “We are doing outdoor spaces in almost every single one of our projects. That’s how important we believe they are,” he says.

Others say providing these spaces is just a new part of doing business. “Some of this stuff may be table stakes,” says Nadir Settles, managing director for the real estate investment manager Nuveen Real Estate. “What would you rather have, an empty building or a building that you’re putting some costs into but you’re filling?”

One of the company’s New York buildings is in the process of adding this kind of outdoor amenity. On its 22nd floor, the building at 730 Third Avenue will soon have a 7,000-square-foot landscaped terrace. Designed by the global architecture firm Gensler, it’s intended to provide space for events and cocktail hours, but also what Settles notes can be a third place.

Settles expects new buildings to have these kinds of spaces incorporated into their designs going forward. For existing buildings, those with outdoor spaces are likely to be more popular with both tenants and landlords. “Of course, if we’re out doing an acquisition right now, and we can buy a building with no terraces or a building with terraces, and we have to pay a little more, we would do that because that’s what tenants are going to want, and you can fill that building,” says Settles. “I think the bar has been raised.”

As for CallisonRTKL, Fairbrother says he’s hoping to do some post-occupancy analysis of new buildings with outdoor spaces to see exactly how they’re being used, and whether they have any impact on worker productivity.

“That would be the real meaningful thing, is to prove it economically. Yes, you spent some money to do this, you created a better environment, and see here the payoff is better productivity,” he says. “I think we have a little more work to do on this and it’s going to evolve, but I think we’re going to be using science to help us decide what’s valuable and what’s not.”